While getting my BA in theater from Temple University, I fell in love with physical and devised theater. I got a certificate in dance and performance from the Headlong Performance Institute in collaboration with Bryn Mawr College and went on to complete the two years of Jaques Lecoq training at the Escuela Internacional de Teatro Berty Tovias Estudis in Barcelona, where I’m currently based. I’m an EMC actor and have worked as an apprentice for Berkshire Theatre Group, a regional theater in Western Mass, and for Philadelphia Young Playwrights as a teaching artist and actor.

I’m currently touring educational theater across Catalunya and devising and producing original work in Europe and the US. In 2018 I was awarded the Crea’t Artistic Residency at Can Castelló which I used as a launchpad for Navigate, an original piece exploring theoretical physics, maritime history and immigration. Navigate was selected for the Prague Fringe Festival and Galway Theater Festival in 2020. For upcoming performances, check out my calendar!

FronTerra is a physical theatre piece that invites us to reflect on the role that borders play in our lives, at both the social and personal level. Through dance, poetry and a visual world of strings and cloth overflowing from an antique suitcase, we explore that which ties us down and that which sets us free.

Sarah, an American, was born in a country built by immigrants but increasingly closed off to the world. Anna, from the Ukraine, was born in the Soviet Union, a country that no longer exists, and has lived through war in her region. They found each other in the European Union, a region constructed on the idea of open borders, at a moment when nationalism is resurging across our globalized world.

Departing from folk traditions of our very different cultural backgrounds, we interweave these with stories of immigration in our two countries and the European Union. From the journeys of migratory birds to the greatest walls of history, through movement we investigate the drawing of borders over the face of the Earth and how humans interact with them.

It’s said that ships are referred to as female because a ship is the only woman that doesn’t bring bad luck at sea. Also because, like mothers, ships protect those they carry within.

What happens when a woman tires of carrying others?
What would happen if a ship decided to sail itself?

Through narration, music, movement and shadow puppetry, we are submerged in the story of a mysterious pirate captain who emerges from the rubble of a shipwreck and sets off toward the horizon and the edge of the world.

This peculiar story invites us to experience the strangeness of being foreign in uncharted waters and of navigating the world as a woman on her own.

In exploration of this mental illness, we discover that it manifests in the form of a faithful shadow haunting the heels of its master, making her daily life into an almost insurmountable challenge. Sometimes sweet, sometimes aggressive, sometimes even seductive, the shadow grows and shrinks in proportion to the protagonist who searches for balance day after day.

Two cabin girls are the only survivors of a pirate shipwreck. Alone on a desert island they encounter adversities turned adventures that keep them moving forward in pursuit of their goal. But the treasure they find at the end of their journey is sure to surprise.

With only a white sheet and a rich world world of sound design, we’re plunged into the sea, the waves, the boat and the island. 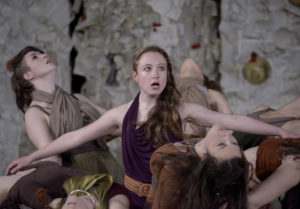 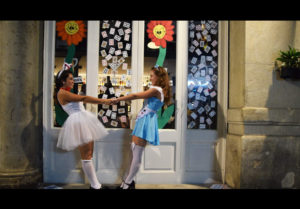 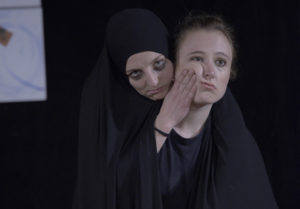 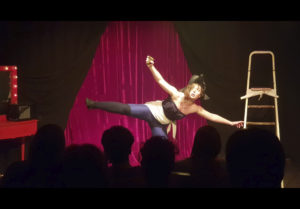 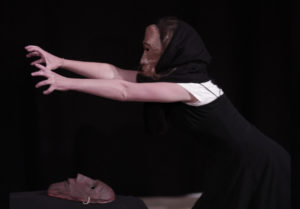 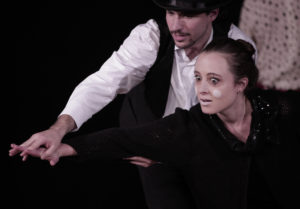